A friend damaged a USB thumb drive accidentally. There were files on the drive that were valuable to him, so making some effort to recover them seemed worthwhile.

The damage was entirely mechanical. Something had whacked the drive while it was inserted in the front panel USB slot of a PC. The whack was hard enough to break the USB A connector off of the drive’s PCB. I don’t know how the stick got whacked, and I don’t know if any damage was done to the PC.

One lesson here is this: No matter how tempting it looks, a thumb drive is not a step. Do not climb your PC by standing on any devices that stick out of your front panel connectors.

The stick was presented to me with its skin removed1, and its USB A connector fully detached from the PCB.

The PCB showed some minor damage to the pads where the connector had been soldered, and one of mechanical tabs (which is also a connection to the shield) had ripped the plating out of the PCB hole in which it had been soldered.

The connector was bent, and the second row of pins providing access to USB 3.0 Superspeed capabilities were broken off. 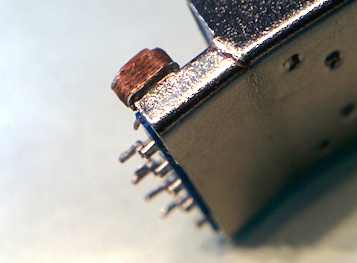 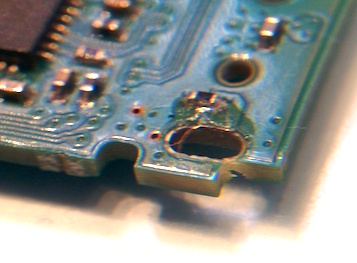 Damage to the PCB was surprisingly limited. The once plated hole looks ugly when inspected closely, and one solder pad was partly ripped away. But it no cracks were seen. The damage could have been a lot worse than this.

The original USB A connector is a USB 3.0 PCB mounted style, with no maker markings or part number visible on it anywhere. Searches of the usual sources for parts turned up similar parts, but not the identical part. The row of pins wired to the new superspeed contacts were broken clean off the connector, so a full repair would require locating a replacement, which may only be practical from high volume Chinese vendors.

USB is carefully designed and implemented so that each new and faster speed grade remains backward compatible to older and slower devices. In this case, leaving the 5 pins assigned to superspeed disconnected would be the same as plugging the fully functional stick into a USB 2.0 wired port.

That is supposed to be fully supported, at the maximum speed supported by the port.

So the plan is to hand wire just the pins needed for USB 2.0 full and hi-speed: Vbus, GND, D+, and D-, along with a wire to the body of the connector. The bent A connector does not appear to have damaged these pins, so we will start by using it.

I cut and stripped 5 pieces of 28 AWG solid wire, stripping as little as practical at each end. I used the soldering iron to reflow and clean all the pads, removing the five broken pins to clear them out of the way.

Then, after tinning each wire, it was fairly easy to tack one end down to the four pads and the intact connector body hole. I then checked and clipped the four signal wires to the same length, and tacked each to a pin on the connector.

With the body wire added, the connector is secure enough to handle with care.

I have a USB hub with connectors facing up. Using that puts the least strain on the fragile hand wiring. I plugged it in and hoped for happy noises from the PC. And got them.

It enumerated immediately as a large2 drive.

From that point, the rescue was simply a matter of selecting all the files on the fragile disk and copying them to a folder on an empty drive. With both drives running at USB 2.0 Hi-speed, (this particular PC does not have any superspeed ports at all) Windows showed the copy running at between 10 MB/s and 12 MB/s. Since I was planning to run the copy only one time, I did not worry too much about the actual data rate, and left it running until it finished, which took a little more than half an hour total.

My friend has his files back, and an expensive conversation piece for his desk as a reminder not to do that again.

But of course you are fully backed up, right?

This user was lucky. In less time than it took me to write this description, I had the stick repaired enough to recover files, and it only took 30 to 40 minutes to copy all the files off since the stick was nowhere near full. (At the observed transfer rate of no more than 12 MB/s after repair, it would have taken about 3 hours to copy 128 GB if the stick were that large and full. Not taking that long is why USB 3 was invented after all.)

So go take a backup of any sticks in your pockets so you don’t have to do this yourself!