Our series of posts about interpreting PDM audio with small microprocessors has been leading up to this point. We have designed small a sensor board containing a PDM microphone and a CPU, that makes it practical to add SPL measurement to any embedded system like the Arduino, or Raspberry Pi, or even to a PC with a USB serial cable.

We call it the SPLear™. 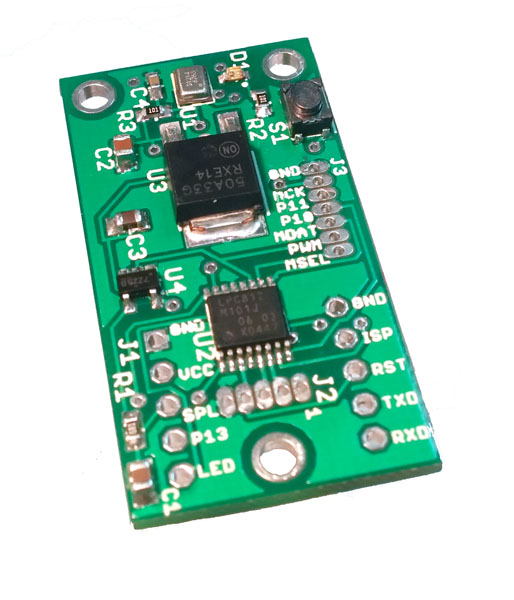 The microphone is a bottom port Knowles Digital SiSonic™ MEMS microphone. The port is centered between the two mounting holes, but the mic is omnidirectional. The CPU is an NXP LPC812 in their 16-pin package, running from the internal 12 MHz oscillator. We provide an analog output driven by a PWM, and an LED that can be independently controlled by PWM, along with a logic level UART, and access to most pins of the mic and the CPU.

The board is small at 0.8″ by 1.5″, with three mounting holes. Ten pins are laid out on a 0.1″ grid for easy use with solderless breadboards. Additional through-holes are provided on 0.05″ centers covering the other features.

The firmware provides the following features.

Much of the firmware has been discussed and published in past posts on this blog, and the source code remains in a public repository. The hardware design (both schematic and PCB layout) will be published as well..

Here it is jumping when honked at:

Let us know what you think!

1 thought on “Announcing the SPLear Board”